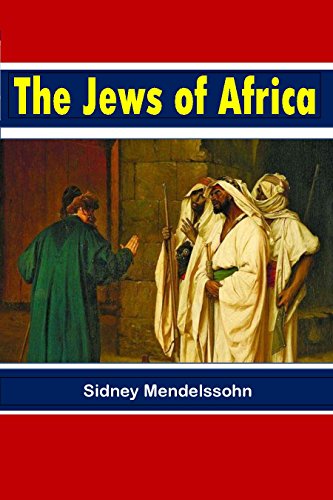 The amazing and obscure history of African Jews is revealed in this absorbing 1920 book compiled by wealthy African diamond merchant Sidney Mendelssohn, who collected African literature.

Since the final destruction of the Jewish kingdom by the Romans, many histories of Jews which have appeared since the time of Josephus have almost invariably represented them as one people as well as of one race and one religion.

Sidney Mendelssohn in his 1920 book “The Jews of Africa,” is the first publication that has been attempted on the plan which to portray the separate and progressive history of the Jews in the different African countries in which they have made their homes, since their expulsion from the land with which they had been identified for something like thirty centuries.
In these pages Mendelssohn endeavoured to compile a narrative of a great part of what has occurred to the Jews of Africa in the eighteen and a half centuries which have elapsed since Titus did his best to erase the Jews as a political race from the face of the earth.

Much of the information contained in this volume is probably unknown to the average educated Jew, to say nothing of the average Gentile. Probably not one Jew in fifty thousand ever heard of the Jewish kings of Abyssinia or the Yemen or of many of the other romantic and perhaps somewhat legendary heroes whom Israel has mustered since the beginning of the Christian era. The ghettoes, ancient and modern, know little of the Gideons of Semen, of Dhu Nuwas of the Yemen, or of Bar Cochba of Palestine. Few of them—at all events of late years—have heard of Sabbathai Zevi, of David Ahoy, or of the other great Jews who did their best in the early centuries and in far distant climes to help their brethren.

Mendelssohn brings to light some interesting facts such as, "If we may believe the Arab historians, most of the African Berbers and Arabs professed the Hebrew faith in the seventh and eight centuries, and the preaching of Mohametanism made no way amongst them."

He provides insight into the treatment of Jews in various African countries, noting:

"Under the Mohammedan laws, they were always subject to outrages and persecutions, but thanks to the patience and tenacity by which they are distinguished, they appear to endure everything, and they have made themselves indispensable to their persecutors by their profound knowledge of commercial affairs. . . . Even at their funerals, the Jews were attacked by boys who were not hindered from throwing stones and using every kind of maledictory expression. In the meantime, despite all their troubles, they managed to provide for their poor, although heavily taxed by every official who could legally or illegally oppress them financially."

Sidney Mendelssohn (18??-1917) had been a diamond merchant in South Africa. After he retired from business, he came to England, and compiled a monumental bibliography of South African literature, based on a magnificent library which he had acquired. From his wide reading, relating to the history of the Jews in Africa, Mr. Mendelssohn compiled the information contained in his 1920 book “The Jews of Africa.”